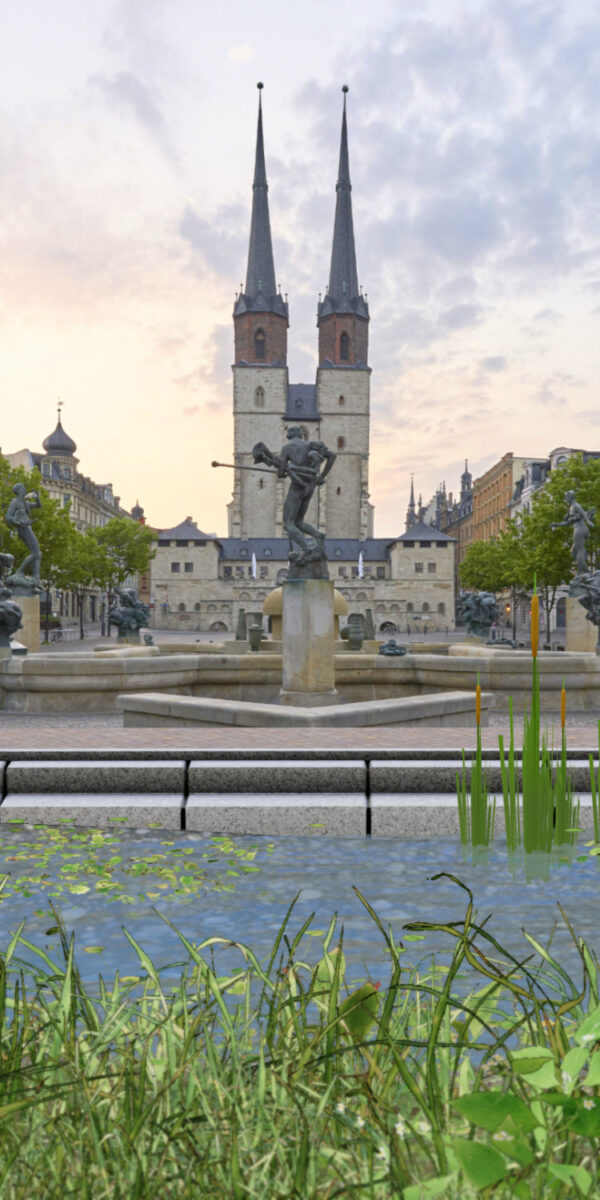 Saale floods in 2013, hurricane-force winds in 2015, record heat in 2022. Halle is getting hotter, drier; storms and heavy rain are attacking the urban landscape. For decades, people in Halle have been campaigning for the climate in their city and global climate issues. The Stadtmuseum Halle and prefrontal cortex dedicate the project Stadtklima Halle to their commitment and the climate-friendly city of the future.

The digital exhibition Hallmarkt of the Future is the first result of the project Stadtklima Halle. The market square, which is known as a climate hotspot, has temperatures in summer that are about 5°C above the city average. Using their own smartphones, visitors can discover actions that improve the urban climate and increase the quality of stay. These exhibits can be accessed via QR codes on information boards attached to bicycles on site. The Hallmarkt of the Future thus invites visitors to go on a discovery tour using augmented reality, where they can experience the hidden Gerbersaale, the concept of the sponge city and relax in a quiet Hallmarkt of the future. The project was meant to be made accessible to as many citizens as possible: Via Youtube, Instagram and Tiktok, but also with ads and reports in the local press and print advertising in the form of postcards and billboards throughout the city.

More about Stadtklima Halle can be found on the project website: http://stadtklimahalle.net/

We Are Loud Tour

Starting in March 2023, the We Are Loud Tour will also show where and how people from Halle have campaigned for clean air, healthy waters and the global climate issues of the present day. Different generations of climate activists from Halle will be actively involved in the exhibits.

Stadtklima Halle was developed as part of “dive in. Program for Digital Interactions” of the Federal Cultural Foundation, funded by the Federal Government Commissioner for Culture and the Media (BKM) in the NEUSTART KULTUR program.